This is actually part 3 of our django-mediagenerator Python canvas app series (see part 1 and part 2), but since it has nothing to do with client-side Python we name it differently. In this part you’ll see how to make your web app load without an Internet connection. HTML5 supports offline web apps through manifest files.

First here’s some background, so you know what a manifest file is. A manifest file is really simple. In its most basic form it lists the URLs of the files that should be cached. Here’s an example.manifest:

The first line is always CACHE MANIFEST. The next lines can list the files that should be cached. In this case we’ve added the main.css and main.js bundles. Additionally, the main HTML file which includes the manifest is cached, automatically. You can include the manifest in the <html> tag:

This is important, so I repeat it: The browser updates its cache only when the content of the manifest file is modified. Changes to your JavaScript, CSS, and image files will go unnoticed if the manifest file is not changed! That’s exactly where things become annoying. Imagine you’ve changed the main.js file. Now you have to change your manifest file, too. One possibility is to add a comment to their manifest file which represents the current version number:

Whenever you change something in your JS or CSS or image files you have to increment the version number, manually. That’s not really nice.

Whenever you change your media files the version hash of the affected files becomes different and thus the manifest file changes automatically, too.

Now how do we tell django-mediagenerator to create such a manifest file? Just add this to your settings.py:

Often you only want specific files to be cached. You can do that by specifying a list of regular expressions matching path names (relative to your media directories, exactly like in MEDIA_BUNDLES):

Here we’ve added the main.css and main.js bundles and all files under the webapp/img/ folder, except for files under webapp/img/online-only/. Also, you might have guessed it already: You can create multiple manifest files this way. Just add more entries to the OFFLINE_MANIFEST dict.

Finally, we also have to include the manifest file in our template:

Manifest files actually provide more features than this. For example, you can also specify FALLBACK handlers in case there is no Internet connection. In the following example the “/offline.html” page will be displayed for resources which can’t be reached while offline:

Here / is a pattern that matches all pages. You can also define NETWORK entries which specify allowed URLs that can be accessed even though they’re not cached:

Here * is a wildcard that allows to access any URL. If you just had an empty NETWORK section you wouldn’t be able to load uncached files, even when you’re online (however, not all browsers are so strict).

Manifest files should be served with the MIME type text/cache-manifest. Also it’s critical that you disable HTTP caching for manifest files! Otherwise the browser will never load a new version of your app because it always loads the cached manifest! Make sure that you’ve configured your web server correctly.

As an example, on App Engine you’d configure your app.yaml like this:

Here we first catch all manifest files and serve them with an expiration of “0” and the correct MIME type. The normal /media handler must be installed after the manifest handler.

Offline-capable web apps have a nice extra advantage: We can put them on the iPad’s/iPhone’s home screen, so they appear exactly like native apps! All browser bars will disappear and your whole web app will be full-screen (except for the top-most status bar which shows the current time and battery and network status). Just add the following to your template: 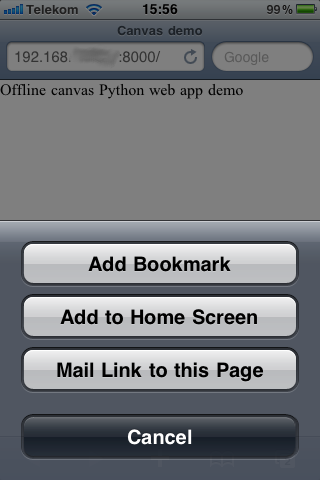 Then you can enter the name of the home screen icon: 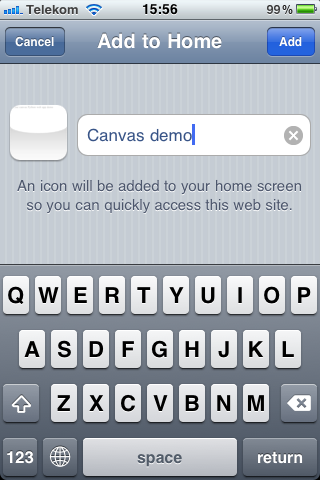 Tapping “Add” will add an icon for your web app to the home screen: 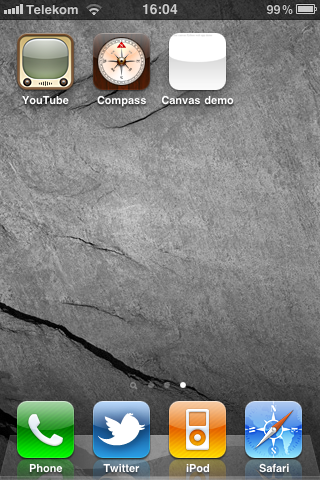 When you tap that icon the canvas demo app starts in full-screen: 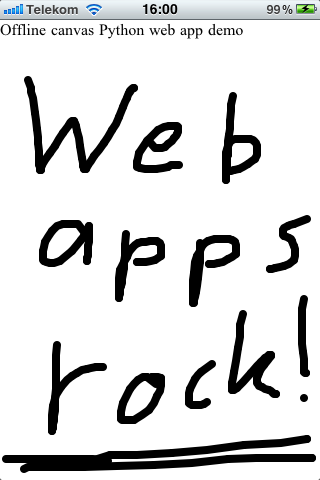 We can also specify an icon for your web app. For example, if your icon is in img/app-icon.png you can add it like this:

The image should measure 57x57 pixels.

Finally, you can also add a startup image which is displayed while your app loads. The following snippet assumes that the startup image is in img/startup.png:

The image dimensions should be 320x460 pixels and it should be in portrait orientation.

As you’ve seen in this post, it’s very easy to make your web app offline-capable with django-mediagenerator. This is also the foundation for making your app look like a native app on the iPhone and iPad. Offline web apps open up exciting possibilities and allow you to become independent of Apple’s slow approval processes for the app store and the iOS platform in general because web apps can run on Android, webOS, and many other mobile platforms. It’s also possible to write a little wrapper for the App Store which just opens Safari with your website. That way users can still find your app in the App Store (in addition to the web).

The next time you want to write a native app for the iOS platform, consider making a web app, instead (unless you’re writing e.g. a real-time game, of course).